Forest of the Impaled 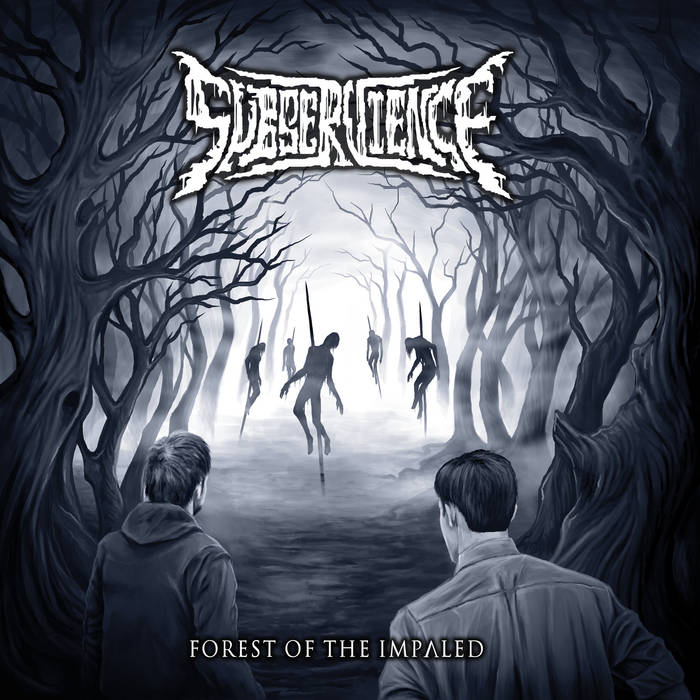 "The monolithic brilliance of this record is stunning and the way that the band elegantly makes the entire thing flow only grows the magic. While at times the record may sound a bit long winded the general effect is potent. In a world where it's so easy to get lost in the muck of a million other death metal bands Subservience have been grinding forward to craft something special."
Two Guys Metal Reviews
Full review: www.twoguysmetalreviews.com/2017/07/subservience-forest-of-impaled.html

"With Forest of the Impaled Subservience have proven they are a force to be reckoned with. The album has the power, potential and repeated playability to undoubtedly leave an impression on the genre as it has on yours truly. All that’s left is hope that it receives the promotion it so rightly deserves in order that it might reach an eager audience left wanting from the lack of commendable newer releases from better known acts. This album is guaranteed to please those with an insatiable hunger for death and blackened metal that resides on the boundaries of slightly diverse and melodic without sacrificing brutality." 9.5/10
Drunk in a Graveyard
Full review:
drunkinagraveyard.com/2017/08/08/an-inbox-crammed-with-metal-5/

"If you want your metal fast, brutal & heavy then look no further then Subservience, one of the most exciting death metal bands of the current era. Drawing influences from the classic sound of death metal with elements of a more modern edge, Forest of the Impaled is all about unbridled fury". 9.5 out of 10
Games, Brrraaains & A Head-Banging Life.
Full review:
gbhbl.com/album-review-subservience-forest-impaled-black-bow-records/

"‘Forest of the Impaled’ is mesmerising in its execution of brutality. Subservience are a potential successor to the mantle of UK death metal, and this is a debut full length they can be proud of. Varied, crushing and cavernously heavy at times, I’d struggle to recommend it more."
Those Once Loyal
Full review:
thoseonceloyal.wordpress.com/2017/08/15/review-subservience-forest-of-the-impaled/

"The musicianship on display is exemplary and belies the band’s relative youth. The polished production further helps to demonstrate this and is crisp enough to accentuate the band’s talents without losing any of their brutal heaviness. All in, Forest Of The Impaled is an excellent full length debut from these guys which manages to capture some of that old school magic while remaining more relevant than ever."
The Moshville Times
Full review: www.moshville.co.uk/reviews/album-review/2017/07/review-subservience-forest-of-the-impaled/

"...it’s “The Dying Light” – which finds the band beginning to step outside the long shadow cast by their influences – that proves to be the album’s real stand-out, raising the bar in terms of both murderous intensity and livewire energy in a way that suggests that the best is still to come from these southern savages.
Following the ballistic bludgeoning of “The Consummation”, which sneaks in an unexpected (but welcome) amount of melody amongst its raging riffs and ferocious fusillades of percussive artillery, “Descend Into Despair” wraps things up in an ambitious display of menacing melody and baleful brutality, whose ominous, brooding piano work, humongous, heaving chords, and unrepentant, deathly aggression, help end the album on a fittingly high note, marking Subservience out as future contenders and ones to watch very closely in the years ahead."
No Clean Singing
Full review:
www.nocleansinging.com/2017/08/02/the-best-of-british-2017-part-7-abhorrent-decimation-dyscarnate-subservience/

All songs written by Subservience

"...Subservience have proven they are a force to be reckoned with... guaranteed to please those with an insatiable hunger for death and blackened metal that resides on the boundaries of slightly diverse and melodic without sacrificing brutality."
Drunk in a Graveyard ... more

Bandcamp Daily  your guide to the world of Bandcamp